Last week I went to a new restaurant. On my way home, I stopped and got some fresh French baked goods. Later the same day, I got an email about a brand new international standard salon that I should check out. I live in present day Kabul Afghanistan.

As much of mainstream media conveys, I live in a conflict-ridden country. In spite of that, life continues here. Afghan people living here remain hopeful and they persevere. People want to invest in their future and they desperately want this place to get better. We have the incredible weight of instability and violence, along with a fractured and slow moving government. Daily, I interact with Afghans who get beyond that because they’re used to having the threat of change for the worse. When you live here it is possible to see everyday evidence that Afghans are choosing to bank on change for the better. 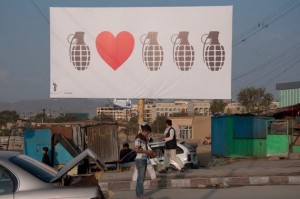 Anyone who lives outside of Afghanistan only experiences current day events here through the lens the media presents. As someone who grew up in the West, I have been witness to both sides of the coin. I understand the Afghan worry of abandonment after so much progress has been made, and so many have put their names on the line in support of democracy. Having grown up in the West, I know that the images you see on the media make it sound like we’re just here killing each other and asking for your money. The confusion, on both sides, makes perfect sense to me.

But what happens now? How do we get the message across that there is a majority population here that wants to be a part of a peaceful and progressive world? I can’t ask the media to concentrate on the positive resolution of most Afghans to live a better life, because they never will. But I will humbly ask you abroad to look for it or at the very least, accept that you don’t know or see enough of the Afghan story.

If you believe in the common peace promoting citizens of Afghanistan, you can be a powerful voice for change here from wherever you are. Social media has allowed for a much flatter world, allowing us to share opinions publicly and instantly. Both positive and negative things happen in Afghanistan, but most of the contributions of news and opinions, especially from abroad, are negative. Constant reinforcement of these perceptions has lead many to believe that the few stories they hear of progress represent a rare phenomenon.

In 2013, I had the pleasure of traveling from Afghanistan to the Oscars in Hollywood. A film that was made here, was nominated for the worlds most prestigious film award. I was honored to be a part of the team and travelled with the films two teenage stars to Los Angeles. We had press interviews scheduled from morning until night because it was such a great story. A street kid from Kabul has made it to the Oscars. These boys had accomplished what most actors only dream of and they were thrilled. But the questions they were asked both in the interviews and by the people they met surprised them.

“Do you feel really lucky to be here? Do you want to stay in the U.S.? Isn’t the food here great? Isn’t it beautiful?”

“You are so well dressed! How in the world did you learn English?”

Not even kidding. I actually heard an Afghan American encourage a child to consider his accomplishment as leverage to leave his country. These kids understand that coming from an unstable country is heartbreaking. They were the first to acknowledge the freedom they felt while visiting the U.S. I remember them asking me if they were allowed to take pictures from the car window because they were used to areas in Kabul where military bases wont allow it. But security aside, they were exceptionally proud of where they came from. They answered the comments with:

“Thank you. I hope that when you see us, you realize that there is so much more talent where we come from and we’re not just a war torn country with no hope. Our country is beautiful, we hope it is safe enough for you to come see it one day.”

But being repeatedly treated like they were a rarity because they were well-spoken and the assumption that they were in their dream world, took a toll on them. Towards the end of the trip they were quite happy to be headed home, ready to get back to school and reunite with their families. I know they loved the trip and the experience, but they did joke about the questions they were asked over and over “what’s your favorite part about the United States?”

“What’s the best memory you have had so far?”

As if this was guaranteed to be the best thing to ever happen to them. I really wish someone had asked them about what they missed most about back home. Or what wonderful thing about Afghanistan they’d like to share with the world. They were met with love but they were also met with a bit of condescendence towards their country and they felt it.

In time since that experience, I’ve kept an eye out for reactions from abroad and I genuinely feel like they come from a caring and concerned place. But often how it reflects back to those who live here is pity. And really there are fewer sentiments that can insult or degrade a people more than pity. I see students and young professionals here capable of operating at an international standard of work, hoping to be leaders in their country one day. It does so much damage to them when they hear from the world that they should aspire for nothing more than to be abroad. These same future leaders sometimes forget their Afghan based dreams because it is overpowered by the aspiration to get out. You can be made to feel hopeless by the world being hopeless for you. Your pity does considerable damage. It is not only insulting; it takes away a confidence in the incredible accomplishments that are happening here.

A recent example illustrates the effect of channeling support in place of pity. Farkhunda is a name that will not soon be forgotten in the Afghan community. She was murdered publicly by a group of monsters in the middle of the city. And I was horrified. And this time, visibly, so was almost all of Afghanistan. In fact, all around the world Afghans and supporters of Afghanistan took to the streets of major cities and protested her death, demanding justice. Inside Afghanistan there were men and women protesting together in some of the harshest and most unstable provinces throughout the country. In this case, too, there was the reaction of pity for the country. Particularly from abroad where many took to social media saying they were “depressed and hopeless” for Afghanistan. But those who channeled those feelings to unified fury and patronage, fostered a sense of solidarity. Looking out from Kabul, it felt like support. It was encouraging. It made Afghanistan’s peace lovers proud to have backing. And best of all, unlike useless pity, it empowered a nation to continue believing in change for the better. 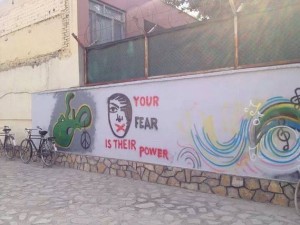