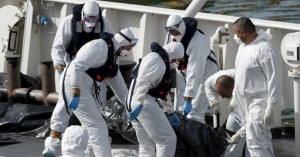 While the European Union grapples with how to address the worsening Mediterranean migrant crisis, some critics are laying blame for the unfolding tragedy on the U.S. and NATO, whose 2011 military intervention severely destabilized Libya, the North African country that has been described as “Ground Zero in the migrant crisis.”

As European leaders gathered Thursday for an emergency summit, and funerals were heldfor refugees who drowned in last weekend’s capsizing disaster, many have noted that to comprehensively address the migration crisis countries must tackle root causes—namely poverty, political instability, and civil war, as well as European xenophobia.

Humanitarian and human rights groups charge that the European Union’s “minimalist” plan barely does even that.

But others are pointing out that those root causes did not emerge in a vacuum, and they are calling on Western powers to take some responsibility for creating the crisis.

“In the short-term, it’s Europe—including Libya’s closest European neighbor, Italy—that deserve condemnation for knuckling under to anti-immigrant pressure and failing to protect the migrants, who are fleeing war and famine in a desperate and increasing unsuccessful bid just to stay alive,” wrote Will Bunch, a senior writer at the Philadelphia Daily News. “But in the long run it was NATO—with the United States playing a leadership role, as usual—that aggressively intervened to get rid of one genocidal dictator, Moammar Gaddafi, without any kind of strategy for dealing with the inevitable chaos that came once Gaddafi was gone.”

Indeed, taking down Gaddafi in 2011 had many unintended consequences, journalist Jonathan Paterson wrote in an analysis published Tuesday at BBC News—among them, a sharp rise in human trafficking.

“[T]he international community’s failure to maintain a commitment to Libya after the removal of Colonel Gaddafi has undoubtedly been a factor in the continuing destabilisation of the country,” Paterson wrote. “Currently, two parallel governments lay claim to rule Libya, and the country is overrun with rival militias exploiting the political vacuum. In this environment, migrants have been able to move freely, and the human traffickers operate with impunity.”

“In the final years of the Gaddafi regime, several agreements were signed with European Union states to control migration from Libyan shores, all of which lapsed after the regime collapsed,” he continued. “Before 2011, migration to Europe across the Mediterranean was in the low tens of thousands. In 2011, it increased to 63,017 and by 2014 there were 219,000 reported to have made the crossing.”

“Libya, for example, was quite a stable and very prosperous country in the past; it had free healthcare, free education, and a lot of benefits for the Libyan population,” Corrigan said. “There was no mass immigration from Libya at that time. But when the west weighed in and overthrew Gaddafi, basically Libya was turned into a failed state. In this situation, people would be desperate to get out of that terrible environment. This [turmoil] in Libya is creation of the west, and exactly the same is happening in Syria.”

Of course, the migrants are not just from Libya; the majority are escaping a cruel dictatorship in Eritrea or violence in war-torn Syria, as well as sub-Saharan African countries such as Niger, Nigeria, and Ghana, according to the United Nations High Commission for Refugees (UNHCR).

Still, as Alessandro Bruno points out at Geopoliticalmonitor.com, Libya “is the country where criminal organizations specializing in trafficking humans have their deepest roots thanks to the current anarchy.”

And that anarchy can be traced directly back to the 2011 military intervention, said Abayomi Azikiwe, editor of Pan-African News Wire, in an interview with RT:

[Y]ou have to go back and see why there is a crisis in Libya itself. Four years ago, led by the Pentagon and NATO they embarked upon a campaign of destabilization and a war of regime change in Libya. It resulted in the deaths of 50,000 to 100,000 people, some 26,000 bombing missions, nearly 10,000 bombs were dropped on the country, and consequently 2 million people were displaced. Since 2011 the situation in Libya has not improved at all. In many cases it has worsened because there is no central government or authority since the overthrow of the Jamahiriya under Colonel Muammar Gaddafi.

Azikiwe added: “This is a much broader international crisis that the U.S. and NATO should address seriously at an international summit…[T]hey have to own up to what they have done in regard to the situation in Libya and to other states in the Northern Africa.”