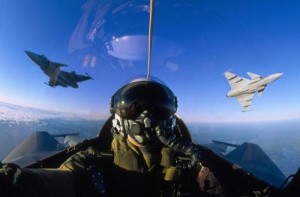 More than 100 planes from eight countries will take part in the Arctic Challenge Exercise that takes place in the skies of the Barents Region in May.

The Arctic Challenge Exercise (ACE-15) will start on May 25 and last for two weeks. The exercise is a follow-up of ACE 13, an exercise two years ago where 80 jet fighters from Bodø and Ørland in Norway, Rovaniemi in Finland and Luleå trained together with pilots from UK and US Air Forces.

“The exercise is part of the Nordic military cooperation and is organized by Sweden together with Finland and Norway, and it is planned to take place every second year,” press spokesperson Louise Levin at the Norrbotten Air Force Wing F 21 says toNorrbottens Kuriren.

A total of 115 planes will take part in the drill. I addition to Norway, Sweden and Finland, also planes from United Kingdom, USA, Switzerland, France and Germany will participate, Levin says.

If it is the world’s largest air exercise, is a question of definition. At least it will be the largest air drill within the same training ground, Kuriren writes. The area of exercise will be nearly all of Västerbotten and Norrbotten in Sweden, as well as parts of Northern Finland and Northern Norway. Luleå, Bodø and Rovaniemi will be the main bases.