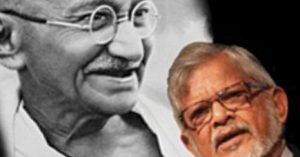 A message from Arun Gandhi,
Grandson of ‘Mahatma’ Gandhi on the occasion of ‘Gandhi Day’ –
The United Nations International Day of Nonviolence –
October 2nd 2015

WHEN THE WORLD is torn apart by violence and government’s commit war crimes to preserve power; when inhumanity has reached its nadir and when hopelessness tears civilization asunder, we think of Gandhi and his message of peace. Another October 2 is upon us when most of the world will pay lip-service to a man who sacrificed his life to show the world that there is a better, peaceful, way of resolving conflicts.

Towards the end of his life when a journalist asked Gandhi what the future of nonviolence will look like, he said: “The people will follow me in life, worship me in death, but not make my cause their cause.” Prophetic words that could be attributed to any of the great women and men we worship today.

Does that mean that a peaceful, civilized way of existence is impossible? Of course not! We lack the compassion and commitment to live peacefully in a world that glorifies greed, selfishness and opulence as basic human rights. We have allowed ourselves to become pawns in a Culture of Violence that permits a few to rule over the destinies of a vast humanity to promote material progress.

What would Gandhi do today? Well, I think he would ask: Have we become a herd of sheep to be led meekly to the slaughter-house? Progress is not material possessions; life is not about selfishness and greed; freedom is not about living in fear; rights cannot be ensured if we refuse to shoulder the responsibility of creating harmony between fellow citizens of the world.

No country, however powerful, can ensure security and stability for itself if the rest of the world is in flames. Gandhi would say we are on the path to self destruction and spiritual annihilation. Salvation lies in the realization that We Must Become The Change We Wish To See In The World!