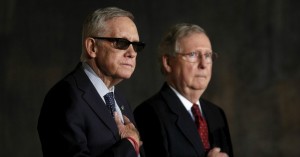 Following Tuesday’s victory, Obama turned up the heat, calling resistant lawmakers to the White House and taking ‘the unusual step of releasing a list of which senators attended’

Having reached a compromise to advance the White House’s corporate-friendly trade agenda, the U.S. Senate will on Thursday vote for a second time on whether to open debate about granting President Barack Obama Fast Track authority to negotiate pending and future trade deals.

This time, thanks to “cosmetic concessions offered to the weak-kneed Democrats,” as one writer put it, the measure is expected to pass.

After Democrats stymied a Fast Track vote on Tuesday, Obama reportedly turned up the heat, calling resistant lawmakers to the White House and taking “the unusual step of releasing a list of which senators attended,” according to Politico.

Citing attendees at that meeting, Politico reports that the president’s “message was clear: You need to figure out how to get over this filibuster and send me the Trade Promotion Authority bill to sign as fast as you can.”